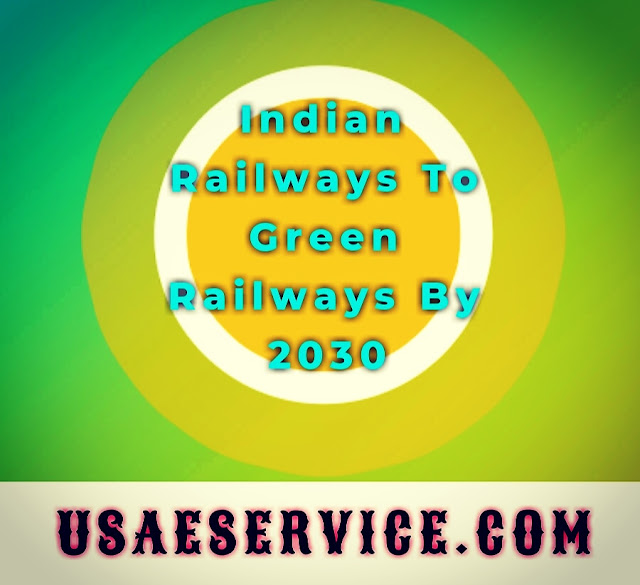 Indian Railways To Green Railways By 2030 Ministry of Railways Initiatives


The Ministry of Railways has taken several major initiatives to tackle global warming and climate change, with the goal of converting Indian Railways to Green Railways by 2030. Railway electrification, energy efficiency improvement and sustainable installation of locomotives and trains, green certification for installations stations, fitting of bio-toilets in coaches and switching to renewable sources of energy, part of its strategy to achieve net zero carbon emissions Indian Railways has completed electrification of over 40,000 route km (RKM) (63% of BG routes), with 18,605 km of electrification work done during 2014-20. Earlier, only 3,835 km of electrification was completed during the period 2009–14. Indian Railways has set a target of electrification of 7000 RKM for the year 2020-21. All routes on the BG network are planned to be electrified by December 2023. Indian Railways is focusing on last mile connectivity and electrification of missing links. Keeping this in mind, 365 km of major connectivity work has been started during the COVID period. One of the main connectivity to Howrah during the COVID period is through Allahabad route Katni-Satna section (99 RKM) of Mumbai-Howrah. An alternate route is provided. Similarly, Pachor-Maksi (88 RKM) section on Indore-Guna-Bina route has also been provided with an alternate route to Mecca-Bhopal-Bina. On Howrah Sealdah-SVD Katra via Patna route, Bhagalpur-Shivnarayanpur (45 RKM) section has been commissioned. The Thiruvarur - Karaikal port (46 RKM) section has been provided with port connectivity to Erode, Coimbatore and Palghat, route connecting Kariyakal port with coal, fertilizer and steel plants in Tamil Nadu and Andhra Pradesh. several initiatives to promote Indian Railways, working to harness the capacity of 500 mega watts (MW) through roof top solar panels, So far 100 mega watts (MW) of solar plants have been installed on the roof-tops of various buildings, including 900 stations. Solar plants with a combined capacity of 400 MW are in various stages of execution. Tenders are already awarded for 245 MW and the target of completing these plants in December 2022. In addition, Indian Railways is trying to produce power from land-based solar installations for running trains. Indian Railways has a land capacity of 51,000 hectares for setting up 20 GW of land based solar plants. The solar power generated will be fed to the central state grid or directly to the 25 kV AC traction system. Railway Energy Management Company Limited (REMCL), a joint venture company of Indian Railways (49% equity) and rights limited (51% equity), have been mandated to take up the land based project. Bharat Heavy Electricals Limited (BHEL) A 1.7 MW project has already been set up at Bina (Madhya Pradesh) with the cooperation of CWC and is currently under extensive testing. It is the first solar project of its kind in the world. Initially for land based solar projects, Indian Railways has launched 3 GW solar project in three phases. Tender has been floated on 29 April 2020 under the developer model for 1.6 GW capacity in railway plots for open access states in Phase I. In Phase II, a 400 MW capacity in railway plots will be developed for non-open access states under the ownership model of REMCL (captive use). Tender for this has been issued on 16 June 2020. In Phase III 1, railway plots will set up tracks under the developer model as well as tracks for open access states, for which a tender has been issued on 1 July 2020. In the wind energy sector, 103 MW wind-based power plants. Has already been commissioned. These include 26 MW in Rajasthan (Jaisalmer), 21 MW in Tamil Nadu and 56.4 MW in Maharashtra (Sangli). Indian Railways has plans to set up a 200 MW wind power plant in Tamil Nadu, Gujarat, Rajasthan and Karnataka in the next 2 years. Realizing its role in climate change, Indian Railways has set up 100% of other greenery like LED lights of buildings and stations. Has initiated the initiative. Indian Railways has also obtained Green Certification from CIII with 7 Production Units (PUs), 39 Workshops, 6 Diesel sheds and 1 Stores Depot. 14 railway stations and 21 other buildings / premises have also been certified green. In addition, 215 stations have been certified with Environmental Management System (EMS) ISO 14001. A total of 505 pairs of trains have been converted into Head to Generation (HOG), saving around 70 million liters of diesel / Rs 450 crore. is likely to. Energy efficiency studies of all 8 production units and 12 workshops have been completed under MoU with CII, resulting in 15% improvement in energy efficiency. More than 2,44,000 bio-toilets in Indian Railways in the area of green initiatives A total of 69,000 coaches have been deployed.
Next Post
Previous Post