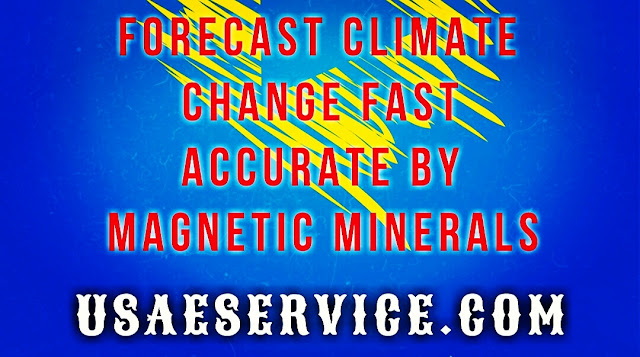 
To forcast climate change in the past gases trapped in fossils, microbes, ice, and isotopes have been used. but now laboratory techniques are cumbersome, expensive, and time consuming. Indian scientists have now developed a technology that is fast and efficient using magnetic minerals. the Indian Institute of Geosciences (IIG), an autonomous institute in the Department of Science and Technology, Government of India, have tracked climate change by following the paleomonosonal patterns of the subcontinent for the exploitation of magnetic minerals, a technology that is faster and more exact with current methods. Magnetic mineralogy is sensitive to changes in ambient chemical and physical processes, resulting in changes in concentration, grain size, and mineralogy. Mr. Praveen Gawli and his team of researchers conducted climate and magnetic studies by collecting sediment samples from different environments and climatic regions of India and gleaned information in magnetic minerals Studied to overcome. Magnetic parameters such as magnetic susceptibility, anesthetic remount magnetization, saturation induced residue magnetization, hysteresis loop and curie temperature. Climate related studies are carried out with the help of fossils, microorganisms, gases trapped in ice, isotopes, and many others. however, take time and effort to separate from the original material, and laboratory techniques are cumbersome. Additionally, the material required to complete various measurements is quite vast. The instruments are also very expensive. The Indian monsoon and its variability were studied through various continental (tree rings, paleoceles, spelothems, fluviolagenin sediments, peat deposits, microfossils, magnetic minerals, etc.) and oceanic (foraminifers, isotopes, isotope ratios, organic material of sediments, etc.). the properties of magnetic minerals for their research into India's paleomonosonal patterns, a new technology implemented in our country. The study of these changes exposes physicochemical regimes in the past, which helps in measuring the climatic patterns. Magnetic minerals are sensitive to the physical and chemical environment in which they are embedded. These external changes bring modifications to the innate structure of these magnetic minerals, which change them from one magnetic phase to another. In this process, magnetic mineralogy also changes, for example, from magnetite to hematite and vice versa. There are also some intermediate phases that attract the attention of researchers from these magnetic phases strictly to complex climatic conditions over time. Generally the original rocks from which sediment is extracted do not contain magnetic minerals that exceed 1% of the total volume or weight of those rocks. The concentration of magnetic minerals in sediments is very low. However, it is sufficient to conduct climate studies because these minerals reveal, the true nature of the climatic and environmental conditions prevailing at the time of their deposition. Once the equipment is installed in a laboratory (compared to other devices, they are quite inexpensive), overhead and maintenance charges are fairly moderate, making measurements, over the years, quite cheap. Additionally, the time taken is also very short. One in a few hundred samples magnetic parameters can be measured in a day. All these factors aroused interest in IIGs for conducting climatological studies with the help of magnetic minerals. Mineral magnetic studies have uncovered 4 regional climatic characteristics covering the entire Indian subcontinent and local climatic event. High monsoon rainfall in the western part of India between 25–60 k (thousand years) was shown to correspond to glacial melt between 29 and 18 ka in the Himalayas. Later, the monsoon weakening in the Himalayas was anticipated, and relatively cold, and dry conditions prevailed in Dhakuri in the hilly areas of the Arabian Sea between 20 and 15 k, causing loess deposits starting at 20 ka. was formed. In the western and eastern part of India, the intensity of the monsoon has fallen between 13 and 10 ka with major effects in the interior of the Arabian Sea and the Bay of Bengal. Between 4 and 2.5 ka, Holocene deficiency and weak monsoon were estimated to be prevalent in the subcontinent. The local feature of small dry cooling seems to be limited to the upper reaches of the Himalayas. Climate affected by natural and anthropogenic activities is changing rapidly. Research will help forecast climate change with greater accuracy and speed. The forecast of climate change can be fast and a high degree of accuracy can be achieved by using magnetic minerals.
Next Post
Previous Post