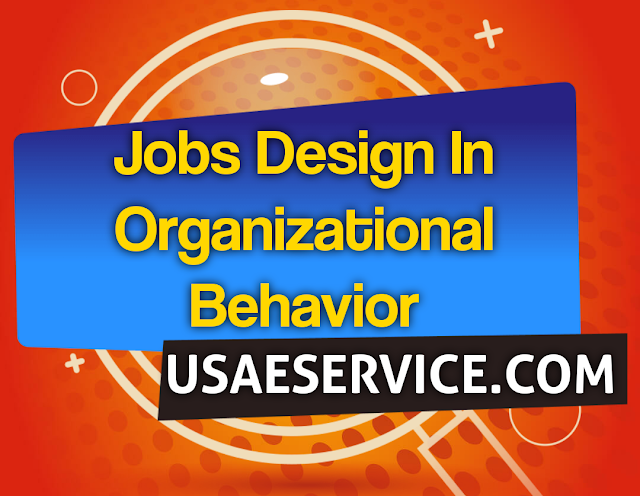 
Job design has a major impact on employees motivation, job satisfaction, commitment to the organization, absenteeism and turnover of the company. The question is how to design jobs properly so that employees are more productive and more satisfied, Managers and researchers have gained attention since the early 20th century. We will review key approaches to job design, starting with our initial history.


Probably the earliest effort to design jobs came during the era of scientific management. Scientific management is a philosophy given by Frederick Taylor in his book, Principles of Scientific Management in. 1911.  Taylor's book is one of the most influential books of the 20th century. Taylor was a mechanical engineer in the manufacturing industry. He saw that the work was being done only with the workers. He observed inefficiencies inherent in the methods of production of employees, and argued that a manager's job was to carefully plan the work to be performed by employees. He believed that scientific methods could be used to increase productivity. Scientific management proposed several ideas that have been influential in job design in the coming years. An important consideration was to minimize waste by identifying the most efficient method for doing the work. Using time-speed studies, management can determine how much time each task will require and plan tasks so that the job can be executed as efficiently as possible. Each task will be carefully planned beforehand, and employees will be paid to perform tasks in a manner specified by management. In addition, job specialization was one of the major advances of this approach. There are many advantages to gaining expertise. Breaking tasks into simple components and repeating them reduces the skill requirements of jobs and reduces the effort and cost of employees. Training time is also shorter for simple, repetitive tasks. On the other hand, from a motivational point of view, these jobs are boring and repetitive and are therefore associated with negative consequences such as absenteeism. job expertise is ineffective in a rapidly changing environment, where employees may need to modify their approach according to the demands of the position. when employees' social objectives were ignored. managers realized their role is influencing the production level of employees. The assembly line where each worker performs simple tasks in a repetitive manner is a direct result of job specialization efforts.


One of the early options for job specialization was job rotation. Job rotation involves employees working from job to job at regular intervals. When employees go to different jobs from time to time, monotonous aspects of job specialization can be get rid of. Job rotation has many advantages for organizations. It is an effective way for employees to acquire new skills and in return for organizations to increase the overall skill level of their employees. which increases the flexibility of hiring employees when needed in different parts of the organization. In addition, job rotation is a way of transferring knowledge between departments. Rotation can also have the benefit of reducing employee boredom, depending on how the employee is performing at a given time. From the employee's point of view, rotation is an advantage, as they acquire new skills that sustain them in marketing for a longer period of time. Is rotation only used at a lower level of an organization? companies also rotate high-level employees to train managers and increase innovation in the company.


Job Enlargement refers to expanding the work done by employees to add more diversity. As opposed to restricting their activities to a smaller number of tasks for employees to perform many different tasks, organizations expect to reduce boredom and monotony as well as use human resources more effectively . Job enlargement may have the same benefits as job rotation, as it may involve multiple tasks to teaching employees. the effect of enlargement on the job may depend on the type of enlargement by expansion adding tasks.


Skill diversity refers to the number of high-level skills a person needs to use for a job. A car wash worker whose job is to direct customers to an automated car wash exhibits low levels of skill, while a car wash worker who acts as a cashier maintains carwash equipment, and chemicals The management of the list demonstrates high skill diversity.


Job identification refers to a person who has charge of completing an identifiable work from beginning to end. A web designer, who designs parts of a web site, has little work recognition, as this work is included in the work of other web designers; In the end it would be difficult for any one person to claim responsibility for the final output. The web master designing an entire web site will have a higher function identity.


Work importance refers to whether a person's work affects the work, health, or welfare of other people. A worker who cleans the floor in an office building may find the job less important, thinking it is not a very important job. However, floor sweepers in the hospital can play their part in helping patients improve. When they feel that their actions are important, employees feel that they are having an impact on their environment, and their self-feelings are boosted.


Autonomy is the degree by which a person has the freedom to decide how to perform his tasks. Autonomy increases motivation at work, but also has other advantages. Giving employees autonomy during work is key to the success of the company as well as the individual, as autonomous employees are free to choose the way they do their jobs and therefore they can be more effective. They are less likely to adopt this is not my job approach to their work environment and to be proactive and creative. Cornell University study shows that small businesses that give employees autonomy grew four times more than those who did not. the level of autonomy as an important task for the development of leadership talent.


Feedback is the tool by which people learn how effective they are at work. Feedback at work may come from other people, such as supervisors, co-workers, subordinates and clients, or it may come from the job itself. We can not say that relationship between feedback and job performance is always right, but it is more controversial. In other words, mere presence of feedback is not enough to make employees feel motivated to perform. the feedback being present, the sign of the response positive or negative, whether the person is ready to receive the response, and the manner in which the response was given will all determine whether employees feel motivated or demoted as a result of the response According to the model of job characteristics, the presence of these five main work dimensions gives employees three attitudes Scientific states experience: they perceive their work as meaningful, they feel responsible for the results, and they gain knowledge of the results. These three psychological states, in turn, relate to positive outcomes such as overall job satisfaction, intrinsic motivation, high performance.


Empowerment is one of the contemporary approaches to motivate employees through the design of empowered jobs. The concept of empowerment expands the idea of autonomy. Empowerment can be defined as the ability to make decisions and do their work effectively, rather than assigning roles, companies should create an environment where employees are enthralled, feel inspired and have the discretion to make decisions about the content and context of their jobs. empowered employees believe that their work is meaningful. They feel that they are able to perform their jobs effectively, have the ability to influence how they affect the company and how they fit in any way, performing their jobs without any supervision and other interventions. These freedoms enable employees to feel powerful. If employees are not given the information to make decisions, empowerment efforts will fail. in any organizations the relationship between access to information and empowerment is well established, empowering individual employees may not be in a doubt, but creat an environment of empowerment throughout the organization.
Next Post
Previous Post