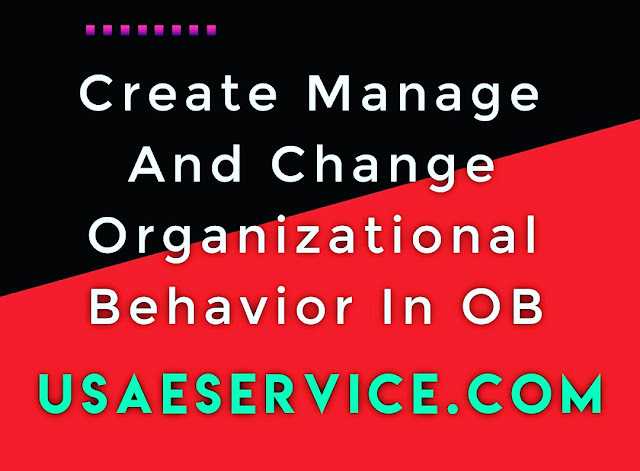 
From Where Organizational cultures come from? It is important to understand this question so that you know how they can be changed. The culture of an organization is shaped by facing the organization's external and internal challenges and learns how to deal with them. the founder's values priorities and industry demands are the most important factors in building the an organization's culture.


An organizational culture depends on their founder's personality, background, values and their future vision for the organization. This gives one reason why changing culture is so difficult, it is shaped in the early days of the company's history. When entrepreneurs starts their own businesses the organization's rules, the structure set up in the company, and the people hired to work with them, is depends on the way as the founders want to do business.


When an organization matures, its cultural values are refined and strengthened. The initial values of a organization's culture influence its future values. organizational culture protects itself from external forces. Organizational culture determines which types of people are hired by an organization and which types of people are left out. In addition, once new employees are hired, the company assimilates new employees and teaches them how things are done in the organization. We call these processes the attraction selection attention and onboarding process. We will also examine the role of leaders and reward systems in shaping and maintaining the culture of the organization. It is important to remember two points, the process of culture formation is actually more complex and less clear than the name. Additionally, the influence of each factor on culture formation is mutual. For example, as leaders can influence what type of values a company has, culture can also determine what types of behaviors leaders display. There are following process by which organizational culture can be maintained, these are.


Attraction-Selection-Attrition (ASA) is the process in any organizations, by this process first employees are attracted to organizations, where job applicants will find different cultures to attractive. who likes a competitive nature can feel comfortable to work in a company where mutual competition is the norm. Others may like to work in a team-oriented workplace. different personality traits employees attract to different organizational cultures. Companies use different techniques to differentiate candidates that do not fit with corporate values. the company attracts, selects, and retains those who share its core values. On the other hand, those who differ in core values will be excluded from naturally occurring turnover during or after the hiring process from the organization. Thus, organizational culture will act as a self-sustaining organism where intrusive elements are excluded.


New employees who are proactive, seek feedback, and build strong relationships are more successful. feedback helps to new employees, Especially at the first job, a new employee may make mistakes or it can be difficult to understand and explain the vague reactions of colleagues. New employees may not know if they are performing to standards, was it a good idea to mention a company's mistake to a customer, By actively seeking feedback, gain a better understanding of whether their behavior is in line with the company's culture and expectations. Many studies show the benefits of feedback sought for new employee adjustments. Relationship building, or networking, is another important behavior that new employees may exhibit. Especially when a company does not have a systematic approach to onboarding, it becomes more important for new employees to actively facilitate their own onboarding. According to an estimate, 35% of managers starting a new job fail in the new job and either leave voluntarily or are fired within 1.5 years. Of these, more than 60% report not having effective relationships with colleagues as the primary cause of their failure. Initially New employees try to build relationships and  interact with their new colleagues on lunch or coffee, participate in company functions, and try to build relationships with them.


Leaders play an important role in creating and changing the culture of the organization. There is a direct correspondence between the style of a leader and the culture of an organization. leaders inspire employees through motivation, the corporate culture is more supportive and people-oriented. When leaders are motivated to create rewards on performance, the corporate culture becomes more performance oriented and competitive. which leaders directly influence the cultures of their organizations. The leader's own behavior will signal to employees what is acceptable behavior and what is unacceptable. An organization in which high-level managers try to involve others in decision-making and seek the opinions of others to develop a team-oriented culture. By acting as role models, leaders send signals about the organization's norms and values that are expected to guide the actions of the organizational members. leaders shape and sustain the organization's culture.


Organizational culture can be shaped by the use of reward systems in the organization, Some companies have reward systems that emphasize intangible elements of performance as well as more easily observable metrics. In these companies, supervisors and coworkers can evaluate an employee's performance by assessing the individual's behavior as well as outcomes. In such companies, we can expect a culture that is relatively people or team oriented, On the other hand, reward system is based on goal attainment, companies focus is only on measuring the results without much regard to the process. Another classification of reward systems can be uses rankings or ratings.


How do you know about the company's culture? We first emphasized that culture affects by organization's member's think, behave, and interact with each other. Thus, one way to find out about the company's culture is to observe or interview employees. Organization culture manifests itself in some visible aspects of the organization's environment. In the following five ways culture shows itself to supervisors and employees. These are,


Rituals reflect repetitive activities within an organization that have symbolic meaning. They create a sense of belonging between comrades and employees. They also work to teach employees corporate values and identify with the organization. During ritual, employees feel about the company's culture and its values, such as self-determination, will power, and enthusiasm.


Another way in which employees can find out about the, company's culture by examine its rules and policies. Companies make rules to determine acceptable and unacceptable behavior, and thus the rules that exist in a company will indicate values of company. Policies about issues such as decision making, human resources, and employee confidentiality state what the company believes in and emphasizes. Rules and policies care about its employees and shows concern for their well-being. By offering employees flexible working hours, rest, and telecommunications opportunities, the company can emphasize work-life balance.


A company building, which includes the layout of employee offices and other work sites, gives important messages about the company's culture. Building architecture can indicate the core values of an organization's culture. The layout of the office space is also a strong indicator of the company's culture. A company that has an open layout where high-level managers interact with employees can have a culture of team orientation, company where higher-level managers have their own floor is a higher-level hierarchy.


the most colorful and effective way for organizations, to communicate their culture to new employees and members is through the efficient use of stories. A story can highlight the important event faced by an organization and the collective response to it, or emphasize the heroic effort of a single employee reflecting the values of the company. Stories usually combine employee emotions and generate employee identification with the company or the heroes of the story. A compelling story can be an important mechanism through which managers motivate to employees by giving direction to their behavior and moving towards a certain goal.

In order for the change of successful organizational culture, it is important to communicate the need for change in employees. One way to do this is to create a sense of urgency on the part of employees and explain to them why it is so important to change the fundamental way in which business is conducted. In successful culture change efforts, leaders communicate with employees and present a case as an essential element for culture change that will lead the company to ultimate success.


Role Model modeling is the process by which employees modify their own beliefs and behaviors to reflect the leader's views. CEOs can model employees behaviors that can change the organizational culture. When such behavior is kept at the top levels, it is likely to affect the company's culture.


Well-crafted training programs can play an important role in bringing about culture change by teaching employees new norms and behavioral styles. decision made change efforts included training programs in team processes and cognitive bias awareness. International Corporation felt the need to change their culture to be more committed to customers, they developed a training program to let employees familiarize with customers and build better relationships with them.


The norms by which employees are rewarded and punished have a powerful role in determining cultural values in their existence. Switching from a commission-based incentive structure directly to a pay system may be important in bringing customer attention among sales employees. In addition, by rewarding employees who embrace the company's new values and promote these employees, organizations can ensure that the change in culture has a lasting impact.


Organizational culture change effort can be increased by developing new rituals, symbols, and stories. One of the first things management did was to show employees that they really meant to eliminate the many elaborate processes the company had and create a culture of empowerment. This action symbolized the coming changes in culture and served as a powerful story transmitted among employees. Replacing old symbols and stories, with new symbols and stories will help to change the Organizational culture.


A recent study of 3,000 employees and managers in the United States has confirmed, that the extent to which employees behave ethically in an organization depends on the culture of the organization. Mandatory ethical training programs without a culture often fail without emphasizing the importance of honesty and trust. For ethical culture building, leadership can be the most influential. Leaders by demonstrating high levels of honesty and loyalty in their actions, can model the behaviors demanded in an organization. If his actions contradict his words, it will be extremely difficult to establish a culture of morality. When leaders create a highly performance-oriented culture, where there are only results and no tolerance for not missing one's goals, the culture can begin to reward unethical behavior.
Next Post
Previous Post