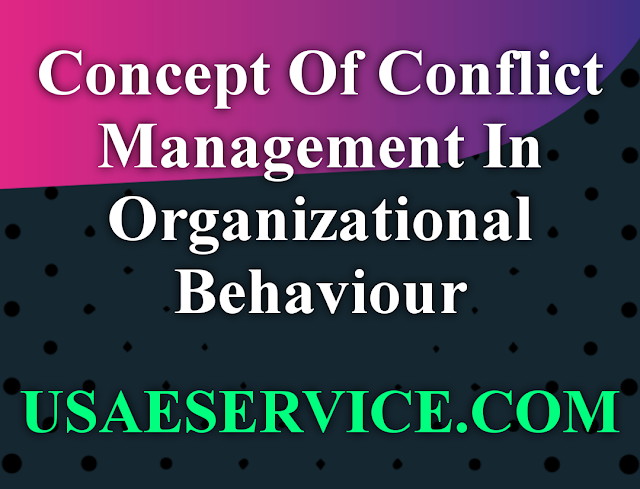 
Conflict is a process that involves people who disagree. understanding the conflict causes and how to treat it is described by, wall J.A. and Callister, R.R. In 1995 Conflict and its management in the Journal of Management. conflict can range from minor disagreements to workplace violence, there are three types of conflicts that can arise within organizations, which are,
Intrapersonal Conflict.
Interpersonal Conflict.
Intergroup Conflict.


Interpersonal Conflict arises within the person. If you are uncertain about what is expected or desired, or you have a feeling of being inadequate to act, you are facing conflicts. Interpersonal conflicts may arise due to differences in roles. Role conflict is also intrapersonal conflict, If you are not the head of any one team, but a member of another team, this type of opposition can arise. The third type of intrapersonal conflict involves role ambiguity. Perhaps you have been given the job of finding a trainer for a company's business writing training program. You may feel unsure about what kind of person, a well-known but expensive trainer or a local, unknown, but low-priced trainer can hire. If you are not given directions on what you want, you can conflict  with many options.


Interpersonal conflict is between colleagues, a manager and an employee, or individuals such as the CEO and their employees. For example, in 2006 Airbus SAS CEO Christian Streef resigned due to his conflict with the board of directors over the issue of restructuring the company. due to differences in personality or values. one person's style may be to go with the gut over decisions, while the other person may have facts. Wants to make decisions based on facts. If individuals come to different conclusions then those differences will cause interpersonal conflict. Mutual conflict leads to loss to many companies. Conflict should be for creating new ideas.


Inter group conflict is the conflict between different groups in the organization and corporate world. There are different types of groups can be found in different departments or divisions in an organization or company, and employee unions and management, or competing companies that supply the same customer. Departments may struggle over budget allocation, Unions and management may disagree on work rules, Suppliers may conflict with each other over the quality of the parts. In corporate world or organization consensus of two or more groups together can create friction between groups, especially if there are scarce resources that divide between groups.


Organization's limited resources such as money, time and equipment are causes for conflicts. Competition between people or departments for limited resources are the main cause of conflict. For example, state-of-the-art laptops and gadgets which are expensive resources, that can be allocated to employees based on need in some organizations. When one group of employees get these resources while others do not, then conflict may arise between employees or between employees and management in the company. Although technical employees feel that these devices are important to their productivity, employees with customer interaction such as sales person give reasons that, these devices are important to making a good impression for customers. Because critical resources are often limited, so that it is a source of conflict in many companies.


Another cause of conflict is dependence on work, That is, when one needs to perform his tasks to rely on others to accomplish his work. For example, if you are given tasked to creating advertisements for your product, you are dependent on the creative team to create visuals, photographers or videographers to create visuals, media shoppers to purchase advertising space, and so on. The completion of your goal airing or publishing your ads is up to others work.


Conflict sometimes arises when two parties think their goals are mutually exclusive. In a company, inconsistent goals sometimes arise due to department managers are compensated in various ways. For example, the sales manager's bonus can be tied to how much sales are made for the company. As a result, the customer may be tempted to offer "freebies", such as prompt delivery to make a sale. Conversely, the compensation of the transportation manager can be based on how much money the company saves on transit. In this case, the goal may be to eliminate early delivery as it adds expense. The two will bow their heads until the company resolves the conflict by changing the compensation plan. For example, if the company provides a bonus based on the profitability of a sale, not just the dollar amount, the cost of the expeding will be deducted from the sale price. It can also happen that if the sale is large enough, both parties will support it in order to speed up the order. On the other hand, if the campaign ignores the selling price, neither party will be in favor of additional spending.


Personality differences between peers are common. By understanding some of the fundamental differences in how people think and act, we can better understand how other people view the world. For example, Type A individuals have been found to have more conflict with their peers than Type B individuals. Personality, behavior patterns and self-monitoring create conflict in organizational behavior and Human Decision Processes.


Sometimes conflict arises due to unintentional communication problem, such as dealing with lost e-mail or people who do not return phone calls. Quick and proper communication response is the best solution for these types of communication problems to escalate a conflict situation. When communicating, be sure to pay attention to behavior and its effects, not the person. For example, if a employee always comes late to all your meetings. You think his attitude is bad, but you don't really know what his attitude is. However, you know what effect of that employee behavior has on you. You can say, when you come late to the meeting, I feel like my time is wasted. Employee cannot argue with that statement, as it is a fact of his influence on you. It is undeniable, because it is your reality.


One of the most common outcomes  of conflict is that it upset an employee or individual in the short term. Bergman T. J. and Volkema R.J.  In 1989,  told about managing the interpersonal conflict at workplace, causes of conflicts, interactive processes and consequences. By D. M. Kolb & J. M. Kolb, book Hidden conflict in organizations. They found that conflict have both positive and negative consequences. On the positive side, conflict may result in greater creativity or better decisions.


Increases stress and anxiety in individuals, which decreases productivity and satisfaction. Increase anxiousness, frustration and emotions, which lowers the morale of individuals, and can downgrade the business and trust, which hinders teamwork and collaboration to get the job done.
Next Post
Previous Post