U.S. Secretary of State Remarks Before The House Committee On Foreign Affairs 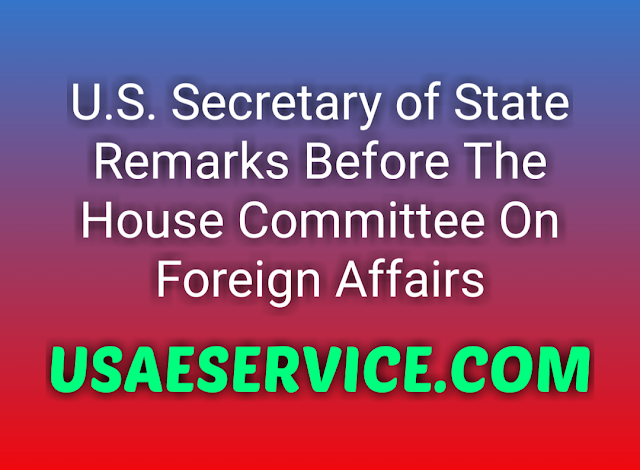 
Iran is the world's number one state sponsor of terror and the world's largest anti-Jewish sponsor, who seeks to wipe out Israel from the face of the earth. Iran and its supporters are responsible for the deaths of hundreds of Americans in Iraq, including an American contractor who was killed on December 27 of 2019. Iran's forces, and its support The militia, which promotes Bashar Assad, undermines democracy in Lebanon and Iraq, and steals humanitarian aid in Yemen. The Houthis attack by hundreds of missiles and armed drones at civilian bases in Saudi Arabia, where 80,000 Americans live, The supported Houthi army launched an attack on the port city of Yanbu. Iran is also responsible for the fall of a civilian airliner in January. One hundred and seventy people died. The regime lied about the tragedy; The regime has still not hit the black box. The Iranian regime killed at least several hundred people during the protests last November with reports of more than 1,500 people. Many millions have suffered losses since it began 40 years before the revolution. The Iranians, and those affected by the regime, are grateful that the United States is ultimately holding its oppressors accountable. The Trump administration will neither appeal and Nor will it tolerate the enormous national security threat that Iran poses to the United States, our friends and our allies. I would like to address the strike on Quds Force Commander Qasam Soleimani, He was the regime's top militant and mastermind of the killing of innocent Americans, Syrians, Iraqis and others. His death reduced the risk for both our personnel, my diplomats and our military abroad, and made it clear that we are ready and able to impose costs on our opponents if They threaten or attack United States. I know during Iran's counter-ballistic missile attack on Al-Assad Air Force Base soldiers were injured. However, the limited nature of Iran's counterargument indicates that Iran's leadership is not keen on increasing military confrontation. They know that if we fight, they lose. He is a hindrance. The JCPOA controlled the regime's deadly campaigns of terror and instability. We reversed that appeasement and deprived the regime of at least $ 50 billion in revenue in history. Implemented the most aggressive economic sanctions. And diplomatically, we have stopped allies and partners to ban Air carriers - all around the Middle East A courier of the regime's arms and personnel. And because of our efforts, Colombia, Honduras, Kosovo, Paraguay, and the United Kingdom have declared Hezbollah a terrorist organization in all aspects. This is the real U.S. leadership to confront Iran. We will keep our pressure. We will continue to protect the American people and American interests in any way. And we will continue our campaign of for a more stable and secure Middle East with its allies and partners.
Next Post
Previous Post