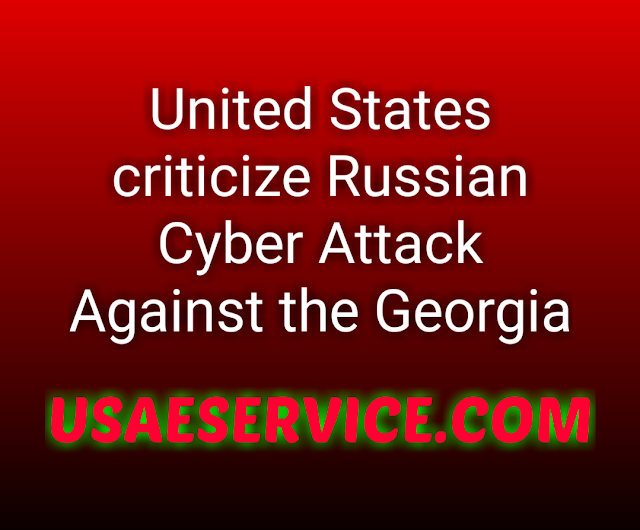 
United states condemns, On October 28, 2019, the Russian intelligence agency General Russian Intelligence Directorate (GRU), cyber attack on Georgia by Main Center for Special Technology (GTST), also known as Unit 74455 and Sandworm, launched a widespread disruptive cyber attack against the country of Georgia. This Russian cyber attack incident, which directly affected the Georgian countries population, disrupted the computer operation of several thousand Georgian government website, and as well as privately run websites and also disrupted the broadcasting of at least two major television stations. This Russian cyber attack on Georgia, contradicts Russia's claim that it is a responsible actor in cyberspace and demonstrates a consistent pattern of reckless Russian GRU cyber operations against many countries. The purpose of these operations is to sow division, create insecurity and weaken democratic institutions. America calls on Russia to stop this behavior in Georgia and elsewhere. Every countries have to secure and safe stability of cyberspace, which depends on the responsible behavior of every nations. We, along with the international community, will continue our efforts to maintain an international framework of responsible state behavior in cyberspace. We support Georgia and its people to enhance their cyber security and to combat malicious cyber actors. We also promise, and We will offer additional capacity building and technical support to help Georgia public institutions, to strengthen and improve their ability to protect themselves from such activities. Source United States Government Websites.
Next Post
Previous Post