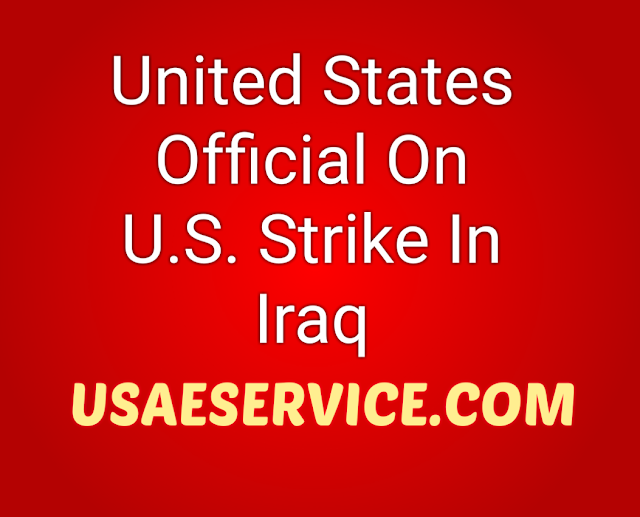 
U.S. Drone Air Strike in Iraq Kills, Top Iranian Military Leader Commander Qassim Suleimani, in Baghdad. We did - it was a defensive strike that was taken and supported by very solid intelligence, and I saw all the intelligence. we were seeing that Soleimani was planning imminent attacks against American diplomats and members of our armed forces in Iraq, Lebanon, Syria and the region. He is the architect of the major terrorist attacks of Iran in the last 20 years. He killed 608 Americans in Iraq alone. And so as we begin to see the broad and very solid intelligence that he is plotting imminent attacks against the United States, the President, as Commander-in-Chief, has a duty to take decisive action. September 11 of 2018 That decisive action has been threatened for a year and a half since the White House made a statement saying that it is after the rocket attacks on our diplomatic facilities in Iraq, and They said that we are going to imagine attacks denying Iran; We are not going to honor the distinction between Iran and the regime and its proximity, and if the regime or its supporters attack American interests or personnel, they will take decisive action. Secretary Pompeo said on 13 December. We said I could do this more often than I counted. The Iranians just did not believe us. And the Iranians met a situation of danger. And as - and - and I would also say: If we had not taken this action, and hundreds of Americans would have died, When we had a chance, So why should not we attack on Solemani. this the beginning of something big and everything. In future decisive action will be taken to eliminate a very, very, effective terrorist in the center of the Middle East to save hundreds of American people. We would take strictly actions against terrorism so that, the blood of wounded and the martyrs will not go in vain. This response will create harsh environment for American forces in Iraq. But we deal it with strictly.
Next Post
Previous Post