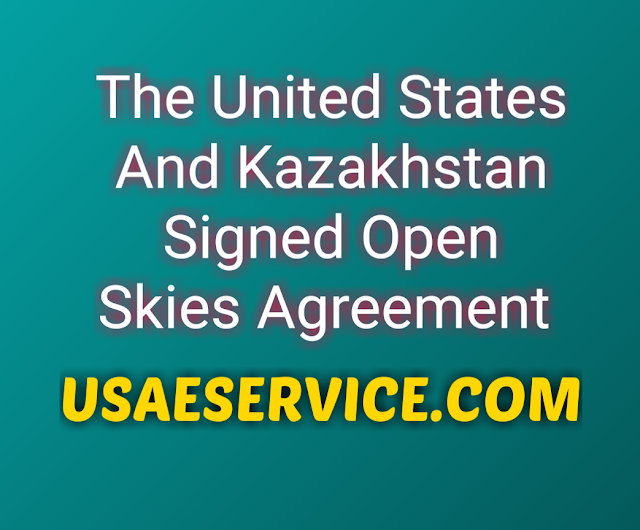 
On December 30, 2019 in Nur-Sultan Kazakhstan, William H. Moser the Ambassador of United States, and the Industry and Infrastructure Development Minister of Kazakhstan Beibut Atamulk signed an air transport agreement between the government of the United States and the Republic of Kazakhstan. The United States and Kazakhstan have signed Open Skies Agreement, Under the international aviation policy. This Air Transport Open Skies Agreement, will enter into force upon an exchange of diplomatic notes between the two governments, The press service of the embassy said, The purpose of This open skies agreement is that, to establishes a modern civil aviation relationship between the Kazakhstan and United States (U.S.). The agreement establishes a modern civil aviation relationship with Kazakhstan in line with the US Open Skies International Aviation Policy. This includes unrestricted capacity and frequency of services, open passage rights, a liberal charter regime, and open code-sharing opportunities.


The agreement will apply to the exchange of diplomatic notes between the two governments. Open-sky agreements allow airlines to make commercial decisions based on market demand, without the intervention of government regulators. By this agreement Air carriers companies can provide more affordable, convenient and efficient air services to consumers and shippers, thereby promoting travel and trade. This agreement with Kazakhstan will promote our strong economic and commercial partnership as well as people-to-people relations. This will create new opportunities for airlines, travel companies and customers. Open skies agreement commits both governments to high standards of aviation safety and security. Open Skies Agreement represents a step forward in the liberalization of civil aviation in Central Asia and expands Central Asia's connectivity with the world. Information on US aviation policy and open-sky agreements is available on the State Department website
Next Post
Previous Post