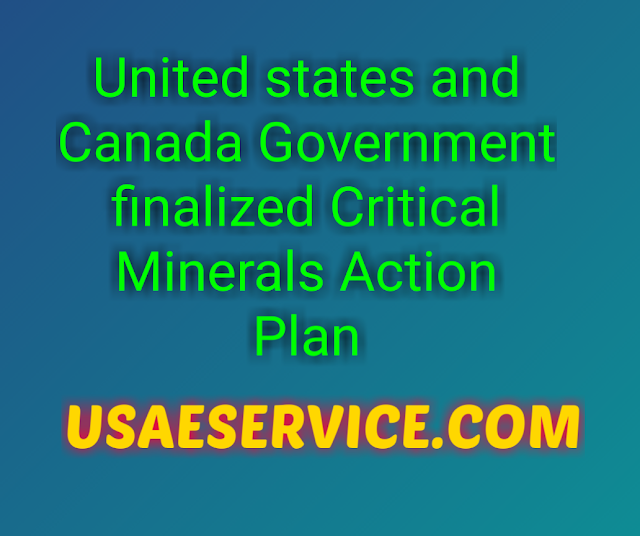 In December 2019, the United states and Canada Government Critical Minerals Action Plan was finalized by Cynthia Kierscht, Deputy Assistant Secretary of State for Western Hemisphere Affairs and Associate Deputy Minister of Natural Resources Canada Sean Tupper. It achieves a target set for President Trump and Prime Minister Trudeau in June 2019. Cooperation under the Critical Minerals Action plan includes the supply of important minerals for strategic industries and defense, to Improve information sharing on important mineral resources, Engage with private sector, And in multilateral forums and working closely with third countries. The action plan extends support to several joint activities, such as research and development collaboration, supply chain modeling, and industry. The comprehensive, all-government approach outlined in the Action Plan will strengthen the United States and Canada supply chain for critical minerals, which are essential for American and Canadian security and future prosperity.

With $ 2.6 billion worth of goods and services every day between Canada and the US, our two economies are better off working together. Canada-U.S. By finalizing Joint Action Plan on Critical Minerals Cooperation, we are advancing safe access to important minerals that are critical to our economic growth and security, including uranium and rare earth elements - further increasing our competition in global markets and Canadian Creating employment for the people. On December 18, 2019, Canada announced that it was a US-led, multi- The country joined the Energy Resources Governance initiative, which aims to promote safe and flexible supply chains for important energy minerals. The initiative complements the Canadian government's long-term efforts to increase transparency in the extracts area and to ensure developing countries the ability to manage natural resources in line with the United Nations Sustainable Development Goals. Canada's partnership in the initiative is an early demonstration of our commitment to cooperate with the US under the Comprehensive Action Plan. Canada is an important supplier of 13 of the 35 minerals to the United states. Has considered it important for economic and national security. We have the potential to become a reliable source of other important minerals, including rare earth elements, key components in many electronic devices that we use in our daily lives. Canada is the largest supplier of potash, indium, aluminum and tellurium to the United States and the second largest supplier of niobium, tungsten and magnesium. Canada also supplies about a quarter of the US uranium requirements and is a reliable US partner in the commodity for over 75 years.
Next Post
Previous Post