The United States, congratulate Juan Guaido On Elected The President 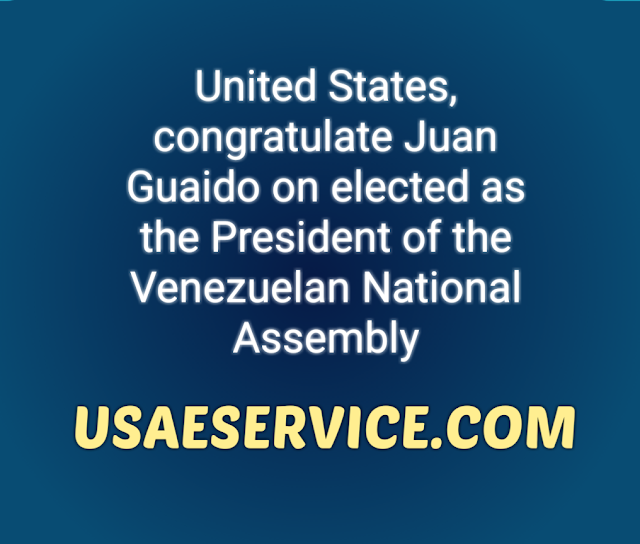 The United States, congratulate Juan Guaido on elected as the Interim President of the Venezuelan National Assembly

The United States congratulates Venezuela opposition leader Guaido after disputed Assembly election to become Interim President of Venezuela national assembly, and condemn the earlier Maduro regime's failed attempts to deny the will of the democratically elected National Assembly. The officials of the corrupt regime have destroyed Venezuela, the last democratic institution in the National Assembly, and independently Unlawful, violent engaged in a campaign of arrest, intimidation and bribe to prevent elected members of the National Assembly from casting votes. And according to the views of their constituents. Today, when the former Maduro regime realized the undemocratic campaign of bribery and intimidation failed to gain sufficient support in the National Assembly, they forcibly denied access to Juan Guedo and his supporters. Without the necessary duties required to present the quorum required by the constitution, they organized a vote 'and announced the result. Without most of the deputation, as constitutionally mandated, there can be no legal opinion. Maduro continues to ignore the constitution and will of the Venezuelan people. Venezuelan political parties came together in a spectacular display of unity to support Juan Guado's re-election. Together, they provided Guaido with a clear distinction of victory. The United States and 57 other countries consider him as the legitimate leader of the National Assembly and thus the legitimate interim president of Venezuela. Juan Guado enriches the struggle of the people of Venezuela to reclaim the prosperity and democracy they once enjoyed. No regime thugs, no prison cells, and no bribery or intimidation can overturn the will of the people of Venezuela. The United States and democratic allies around the world commit to the people of Venezuela and their efforts to end the brutal and inept dictatorship, under which they live. Venezuela's repression and poverty, which has already forced more than 15 percent of the people to flee the country, will only begin to end when democracy returns completely. We wait for that day and reimagine ourselves to support the interim President Guedo, the National Assembly and free and fair elections.
Next Post
Previous Post