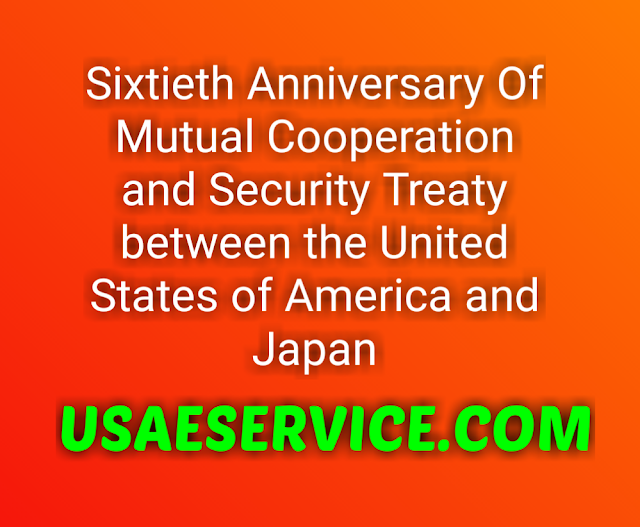 
U.S. Japan Pledge On 60th Anniversary Of Mutual Cooperation and Security Treaty between the United States of America and Japan. The United States Government Secretary of Defense Mark Esper for the Government of the United States of America, and by Foreign Minister Toshimitsu Motegi and Defense Minister Taro Kono for the Government of Japan signing of on the occasion of 60th Anniversary of the Mutual Cooperation and Security Treaty between the United States and Japan. Sixty years ago, on January 19, Japan and the United States signed the Mutual Cooperation and Security Treaty. As we signed the treaty Let's celebrate the 60th anniversary and see the 75 years of friendship and trust between the two nations since the end of World War second. We pay tribute to the predecessors for their wisdom, courage and vision. We also express our gratitude to the men and women of the United States Armed Forces and the Japan Self-Defense Forces for their dedicated service in protecting our shared values and interests. Respect for human rights and our unwavering commitment to an international order based on rules, lies in our alliance Neither has played and will play an integral role in ensuring peace and security of our two countries, a free and open India-shared vision of the Pacific through regional security cooperation. Our alliance is stronger, wider and more urgent than ever. While honoring the achievements of the last 60 years, we reiterate our unwavering commitment to strengthen the alliance and uphold our common values and principles for the future.
Next Post
Previous Post