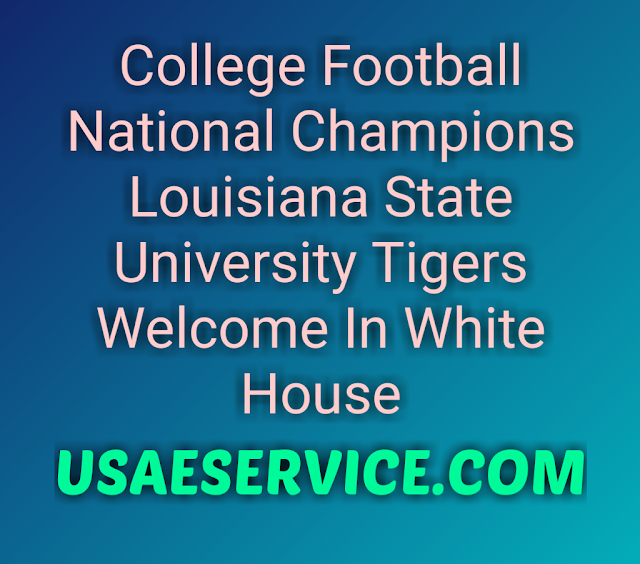 President Donald Trump welcome to the Louisiana State University Tigers, coach and incredible team players, Today in the white house, I have the great fortune to welcome you College Football National Champions. And, coaches, we have a lot of great politicians and some football players here. I really respect football players to be honest. We have joined many loyal fans of purple and gold, including Ambassador Robert Lighthizer, who has just been our great deal. Where is robert? Just had our great two deals. We made two of the biggest trade deals in history: one with China and the other with Mexico, Canada. And with China, we are taking in $ 250 billion per year. And with Mexico, Canada, we are taking bill of hundreds of billions of dollars a year. So that's great, isn't it? And it makes our country stronger and better. And you did a great job. you are a tremendous supporter of the team and your state. And we very much appreciate you being here. Thank you very much. Steve Scalise, a special person. Got a lot of courage. You know, I went to the hospital. He had a problem, the doctor was saying, "It doesn't look good, sir. It's one hell of a way to be, but Steve Scalise got a lot of guts, I'll tell you. To all the incredible coaches and players - and this team, your head coach. I saw him on television. I said, "Man, that man is everyone - he's all man." He is a big, strong looking boy. I think it was a combination of both. It was difficult to begin with, and then he developed a slight laryngitis. But, man, whatever the hell it was, Ed Orgarn. You have done something that few people will ever be able to do again. The team has been called one of the greatest teams - perhaps the greatest team in the history of college football, rightnow And it is very amazing.
Next Post
Previous Post