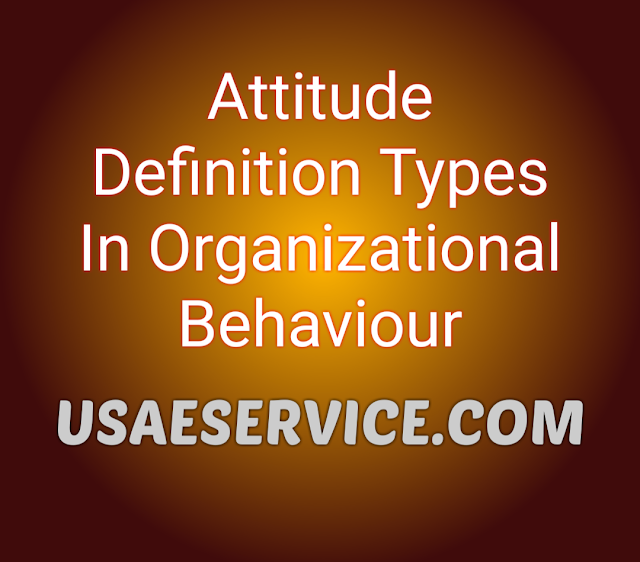 An attitude is a positive, Negative and mixed assessment of an individual or object, which is expressed at some level of intensity. It is an expression of a favorable or unfavorable assessment of a person, place, object or event. These are fundamental determinants of our perceptions and actions towards all aspects of our social environment. The approach involves a complex organization of evaluative beliefs, feelings and tendencies for certain actions. How much we like or dislike something. Determines our behavior towards. We want to interact with the things we like or stay connected to. We avoid things we don't like. For example if somebody has a positive attitude about changes, He is friendly and has a good attitude, He was showing some attitude during practice today. , So the coach refused them, I like my friends, which means that I am expressing my attitude towards my friends,


Attitude is the manner, temperament, emotion and condition, especially in relation to a person or thing tendency or orientation.
Gordon Allport describe , "attitude is an approach towards mental and neurological state, conducted through experience, which enhances an instruction or dynamic effect on a person's response to all objects and situations, with which it is related.
Frank Freeman describe, "An attitude is a readiness to respond to certain institutions, individuals, or objects in a coherent way that has been learned and becomes a specific mode of response.Thurstone describe, "An attitude reflects the sum of man's inclinations and feelings, prejudice predetermined assumptions, thoughts, apprehensions, threats, and any other specific subject."
According to Anastasi "attitude is a tendency to react favorably or unfavorably to a specified class of stimuli, such as a national or racial group, a practice or an institution."
NL Munn describe, “attitude is Practices learned to be a precursor to aspects of our environment. They may be positively or negatively directed towards some people, service or institution. "


Attitude is describe as a tendency to react positively or negatively to a person or situations. Thus the two main elements of the attitude are the tendency and the direction of the approach. It is defined as the mental state of readiness, Organize through experience that has a directive or dynamic effect on responses. These can be explicit and implicit. Explicit attitudes are those, we consciously know the clearly influence of our behaviors and beliefs. . Implicit attitudes are unconscious, but still have an impact on our beliefs and behaviors. according to psychologists Thomas, who limits the tendency of one level attitudes as positive and negative, is associated with the object of psychology. Object psychology has included symbols, words, slogans, people, institutions, and ideas.
There are following Characteristics of Attitude.
Attitude is a complex combination of things that we call personality, beliefs, values, behaviors and motivations. All people, regardless of their status or intelligence, Attitude is present in every person's mind. Which define our identity, guide, our actions, and influence. how we assess people. the sense and belief component of attitudes is intrinsic to a person, we can change a person's perspective. Can be seen by his or her behavior. attitude helps us to define how we see situations, as well as to define it. it behave towards situation or object we can offer an inner feeling, belief and thoughts about people and goods. attitude is consciously aware of an implicit attitude that is unconscious, but still has an effect on our behavior. attitude based on direct experience predicts future behavior more accurately. personality has certain aspects such as interests, appreciation, and social conduct. It represents the total sum of a man's inclination and emotions.


The cognitive component of an attitude descibe to the beliefs, ideas, and characteristics, that we associate with an object or person. Attitude relates to a person's general knowledge. They usually come to light in generally or stereotypes.


The behavioral component has the tendency of a person to behave in a particular way towards an object. It refers to the part of the attitude, that reflects a person's intentions in the short term or long term.


There are a majority of people in every society who like to live a harmonious life. They try to avoid unnecessary confrontation with people. Naturally, they are inclined to develop positive attitudes towards most people and issues. Our attitudes positively facilitate our relationships with members of valued groups. And can maintain. Social roles and social norms more influence on attitudes. Social norms include rules of society considered appropriate for behavior.


In general, the attitude of the people is important. Sometimes direct instruction can affect the formation of attitude. A person gives information about the usefulness of a fruit. Based on this information, we can develop a positive or negative view of that fruit.


The family is the main source for the formation of attitudes. Parents, older brothers or sisters provide information about various things. An individual developed approach, whether positive or negative is the result of family influence, which is very effective and difficult to change.

Attitude may involve a bias, in which we prejudice an issue without giving fair evidence to all the evidence. Prejudices are pre-determined thoughts or judgments where the person develops some attitude toward other people, objects, etc. If we favor someone who is accused of a crime, we can find him guilty regardless of the evidence. We can also be biased in favor of something.


To form the basis of attitudes, personal experiences have left a strong impression. Therefore, when personal experience involves emotional factors, the attitude will become more easily. In situations involving feelings, appreciation is more deeply experienced and The trace will be longer.

Communication, mass media such as television, radio have a major influence in shaping people's opinions and beliefs. new information on something by the media, that provides the basis for the emergence of new cognitive attitudes towards it.

These Institutions have strong influence in shaping attitudes, as they lay the foundation for understanding and moral concepts within the individual. Understanding the good and the bad, the dividing line between something, Which can and cannot get from the center of education and religious institutions.

Health clinical psychologists have generally recognized that physical, health, and vitality are important factors of adjustment, and it has often been found that malnutrition or disease or accidents have interfered so severely with normal development, that severe disturbances behavioral of individual.

Our economic, business and occupation situation also contributes to the attitude. They determine, in part, our attitude towards unions and management and we believe that some laws are 'good' or 'bad'. Our socio-economic background influences our current and future perspectives. positive or negative evaluations include other characteristics, such as importance, certainty, access, and associated knowledge. Attitudes important in the study of social psychology Are because they affect the amount of attention and a person has a specific vision. Shapes can influence the type of decision. Generally, we recognize that people behave according to their behavior. However, social psychologists have found that attitudes and actual behaviors are not always fully aligned.


Job satisfaction is the level of satisfaction, a person feels about their job. This feeling is mainly based on a person's perception of satisfaction. A person with a high level of job satisfaction has a positive attitude about the job, while a person who is dissatisfied with their job has a negative attitude about the job. A person with a negative angle exhibits a temperament disposition that's inclined to expertise nervousness, tension, upset, distress, etc. whereas those with a positive angle can feel happy in themselves, others, and their work. Job involvement refers to the degree to which a person psychologically identifies with their job and is considered important for self-worth. Higher levels of job involvement have been found to be related to lower absenteeism and lower resignation rates.


Job involvement refers to the degree to which a person psychologically identifies with their job, and is considered important for self-worth. Higher levels of job involvement have been found to be related to lower absenteeism and lower resignation rates. However, it predicts more frequent turnovers than absenteeism, as was the former with more than 16 percent of variance.