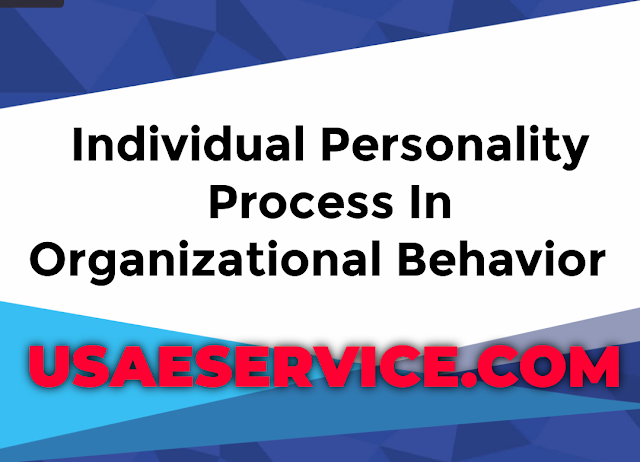 
Personality is defined as a specific set of behavioral, cognition, and emotional patterns that develop from biological and environmental factors. While there is generally no consensus on the definition of personality, most theories focus on motivation and psychological interactions with one's environment. Raymond Cattell, define personality as traits, that predict a person's behavior. On the other hand, behaviorally based approaches define personality through learning and habits. most theories consider personality to be relatively stable.


Theoretical Structure of Personality Several theories have been developed to explain personality, that have great organizational impact.


Trait theory is important in the analysis of individual personality. This describe a person's behavior. Various characteristics, aggression, humility, laziness, ambition, loyalty, and punctuality. Allport's theory of personality affect the individual and internal cognitive and motivational processes that affect individual behavior. Allport believes that personality is biologically determined at birth, and is shaped by a person's environmental experiences.


Cognitive theory values a person's thoughts, determining his feelings, behaviors and personality. cognitive theorists believe that, without thought processes, we can not have no emotions, no behavior and no function. Thoughts is the process that always come before any emotion and action. The cognitive perspective of personality is the idea that, tell to the people who they are, how information is included, perceived, analyzed, interpreted, encoded, and retrieved. People have specific cognitive form habits that are seen in their personalities. The cognitive view is a person's mental organization. the information people receive in this world, they need to cope with, integrate and organize all the information in the world.


The humanist view focuses on the positive image of Human nature. Abraham Maslow proposed that a person is motivated by a hierarchy of needs. The order requires from lowest to highest, satisfaction of hunger and thirst, safety, being loved, avoiding loneliness, achievement, recognition, self-esteem, Self-realization. Maslow also believed that during life's activities, the achievement is extreme experiences, feelings of incredible peace and happiness.


Psychodynamic Theory was proposed by Sigmund Freud, he was the founder of psychoanalysis, there are 3 elements of personality in his theory, that are driven by identity, internal and basic needs, which are usually as important such as hunger and thirst. Personality development depends on the interaction and environment during the first five years of life. Parents behavior is important for normal and abnormal, Personality and mental health development. American psychologist Henry Murray explanation  the theory of personality, that requires, "the ability or readiness to respond in a certain way under certain circumstances". Theories of personality based on needs and objectives, that our personality reflect in behavior. these psychological needs play a major role in our personality.


Social learning theory is concept of human behavior, that is specifically learn and shaped by reinforcement, rewards and  punishment. Social learning theory is cognitive learning theory that is influenced by psychological factors such as behavioral learning based on environmental stimuli. Albert Bandura's theories of social learning emphasized on cognition, behavior, and environment, Bandura's theory has 3 main  components that include your behavior, the environment in which the person behaves and observes the behavior of others, Some psychologists theories focus on genetic influences on personality. Hans Essenck consider that genetics is the dominant determinant of personality, on the other hand, he believes conditioning also plays a major role in personality development.


The five most important dimensions of personality, that play an important role in organizational behavior. Numerous studies have shown that employees, who are highly attentive and perform better than those who are not so diligent. These five most important dimensions of personality, will help to exaggerate a tendency to achieve something on managerial and sales jobs.


Conscientiousness or Duteness refers to a person who is orderly, punctual, achievement oriented and reliable. Integrity is a personality trait that similarly predicts, how high a person's performance will be in various occupations and jobs. In fact, dutiful is the most desired attribute which should be seen by recruiters in a job seekers candidates, and highly dutiful applicants succeed in the interview.


Extrovertism is the quality in a person, by  which he is outgoing, talkative, sociable, and enjoys socializing. this quality is more effective in sales-related jobs.


Agreeableness is the degree which teach a person to sociable, tolerant, sensitive, trustworthy, kind and warm. people who are high in agreeableness are people who get along with others. Not surprisingly, agreeable people constantly help others in work.


Neuroticism is a quality in a person, which results anxious, irritable, tempered, and moody. This is probably the only major five dimension where high scoring is undesirable. Neurotic people have a tendency to experience emotional adjustment problems and habitual stress and depression. In neuroticism, a lot of people experience many problems at work.


Openness is a quality of a person which results curious, original, intellectual, creative and open to new ideas. People high in openness tend to thrive in situations that require flexibility and learning new things. They are highly motivated to learn new skills, and do well in training settings.
Next Post
Previous Post